Doof is the houseguest who won't leave and Sara wants him OUT.

"Doof's Day Out" is the tenth episode of the second season of Milo Murphy's Law.

Sara has had enough of Doofenshmirtz's antics as a houseguest at the Murphy's, and wants him out as she's behind schedule on finishing her Time Ape costume. Milo, Mom and Dad suggest to Doof to go out for the day so Sara can finish her costume in peace.

As the Murphy's sit down for breakfast, they are joined by Doofenshmirtz and Sara voices her annoyance. They manage to talk their house guest into going out for the day, much to Sara's joy.

He goes to the Natural History Museum with Milo and his class. They go to the digestive system exhibit but Zack's claustro-avoidance acts up. Doof turns the liver into a go cart and after a short ride, they crash into the gift shop.

Soon, Brigette comes, and then drops Doof off at the Racoon Rescue Center. Soon, he freaks out when he sees the raccoons and prematurely releases them, causing the volunteers to chase after them in a comedic manor. He uses a hurding whistle to call the raccoons back, but he also causes a stampede of pigs. He leads them to the Murphy house and they steal Sara's Time Ape costume.

He goes with Martin to an electric plant. While there, he pushes a decoy flooding button and stops someone from pushing the real button, only to inadvertently push it himself.

Back at the Murphy's house, Doof has a talk with Sara and they talk about how they feel about him at the house. Seconds later, a reporter knocks on the door with the people he saw that day. They explain how his actions actually helped them. A man from the museum says he made the digestive system exhibit the most exiting exhibit at the museum. A woman from the raccoon shelter says a video of his actions went viral and they are receiving more donations then ever. A man from the plant says he stopped an overheating core from exploding that they had no idea about due to the warning systems failing. Doof is given an award and thanks the Murphy's, especially Sara. Doof and Milo's family hug, but is interrupted when the triceratops shows up eating the bushes which Doof's Reconstitute-Inator revives a triceratops by accident at the museum. Doof is reviled as he thought a raccoon would attack him.

For a full transcript of "Doof's Day Out", click here. 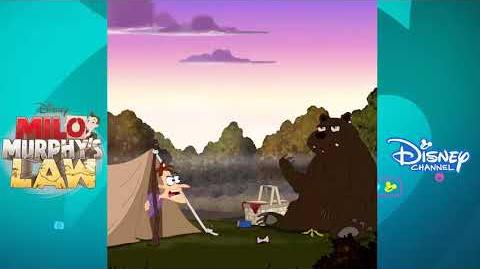