Created by Orton Mahlson at Balsawood Studios Inc in New Zealand,[1] the franchise follows the adventures of Dr. Hankry Zone and his good friend Time Ape as they travel through space and time in their Time Beehicle. During their travels, they overcome many monsters such as the dreaded Trashcandroids.

In the intro theme, a billboard that falls over reads "Dr Zone & Time Ape" "Saturdays Tea Time". Below it notable fans Kris, Wally, Josh and Sara cheer, with Josh in his Dr. Zone get up.

In "The Undergrounders", once returning to the surface world, the Foreman says he has a month's worth of Dr. Zone to catch up on. Milo mentions that the Trashcandroids did something noteworthy in these episodes.

In "Rooting for the Enemy", there are posters of Dr. Zone and Time Ape in Milo's room.

In "The Doctor Zone Files", Milo and Sara show a Dr. Zone Files marathon to Zack and Melissa to binge and prepare them to see The Dr. Zone Files: The Movie Files with them later that day among many other dedicated fans.

In "Wilder West", Sara recognizes part of a dude ranch as the undiscovered shooting location of Dr. Zone episode 576 and alerts other fans. The old race horse at the ranch was named after the occasion.

In "We're Going to the Zoo", the poster of Time Ape in Milo's room is seen again.

In "Missing Milo", the lost pilot episode of Dr. Zone from 1965, "The Seed Beasts", is found, making it a found episode. Sara, Melissa, Zack and Milo plan to watch it together. After Milo disappears, Melissa and Zack return to the Murphy house after a fruitless search, to find Sara already watching it while she records it. While they discuss Milo, Diogee spots Milo on the program. In search of answers, they go to the home of Orton Mahlson, who's been living in Danville for some time, and he gives them a letter from Milo fifty years ago that tells them where to go to find him. Upon seeing himself on screen, Milo admits that he isn't a very good actor.

In "Star Struck", Reggie, a film crew member who previously appeared when he lined up to see the Dr. Zone movie in "The Doctor Zone Files", is wearing a Dr. Zone shirt.

In "Disaster of My Dreams", during Elliot's dream, Max is carrying a lunch box with a picture of Time Ape.

In "Love Toboggan", the show is brought up during Sara and Neal's date as they both like the show. It's revealed that Martin watches the show, that Sara started watching it in fourth grade and that she asked Brigette if she could change her name to Time Ape. Sara cosplaying as Time Ape and Dr. Zone are imagined by Sara to symbolise competing opinions in her mind.

In "The Island of Lost Dakotas", a man on the bus Dakota takes has a Dr. Zone hat.

In "Fungus Among Us", Milo, Cavendish, and Dakota go back in time to Balsawood Studios. There, the time-travellers' appearance inspires Orton Mahlson to create The Zone. His ideas are aided by Milo who, upon learning who Orton is and being asked about the show he'll create, gladly gives a near-complete rundown of the show's fifty-year history. Orton then follows the others on their adventure through time against the Pistachions, writing down everything that happens to them to use it as inspirational material for the show.

In "A Christmas Peril", Sara watches the show on a television in an electronics store when she, her family, and others are having dinner at the Chinese restaurant at the mall.

In "The Phineas and Ferb Effect", Sara loses the Time Ape design in her shirt, but gains it back when Orton and Professor Time defeat Derek.

In "Doof's Day Out", Sara is heard having a conversation with Neal on why Time Ape has a clock for a head.

In "Disco Do Over", an audience member is seen wearing a shirt that reads "I love the Dr", which is a reference to Dr. Zone.

In "Ride Along Little Doggie", Milo is seen wearing a Dr. Zone costume, as the theme music briefly plays.

In "Safety First", Doof watches Dr. Zone on the Murphy's couch with Diogee. 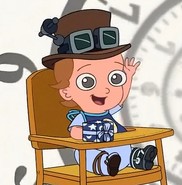