Their football team faced the Middletown Tigers, who had held back its best players for six years so they could purposefully enter much older players into the competition. But the Geckos were able to beat them 43 to 42, due to Milo joining the Tigers fans and Murphy's Law affecting the Tigers instead of the Geckos. ("Rooting for the Enemy")

A kickball game is being played near where Mrs. Murawski's science class is testing their egg protection containers. The participants are covered in egg yolk when Big Bertha destroys a delivery truck full of eggs. ("Sunny Side Up")

Some students were practising basketball while Zack handed out invitations to Milo's birthday party. ("Party of Peril")

Five students competed against the Middletown Middle School Middlemen, led by Wendy, in the unique title event. The Geckos were able to win against the more prepared Middlemen as they had experience dealing with Murphy's Law and the unexpected; they were therefore better able to cope when the athletics field was destroyed. ("Athledecamathalon")

Martin played in the Jefferson County Middle School soccer team and was able to win a game 1-0 when Murphy's Law incapacitated all other players, winning a trophy in the process. ("Athledecamathalon")

Trophies earned by the Geckos 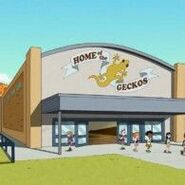