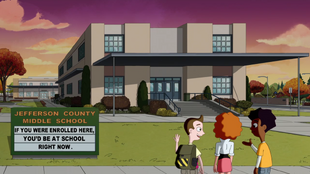 The marquee in front of Jefferson County Middle School appears in several episodes. It is a dark green signboard with the name of the school in orange-yellow letters that can be lit up at night, with three white rows underneath, on which a customizable message can be displayed using letter cards. This marquee always shows a different message whenever it appears on Milo Murphy's Law, usually displaying a snarky message or reference, and has developed into a running gag.

There is also a marquee outside of Jefferson County's football stadium. This one is a gray electronic sign instead of a letter board, and has a black LED screen that shows yellow text. It appeared in only one episode so far but has shown three different messages.

World Without Milo
Add a photo to this gallery

Retrieved from "https://milomurphyslaw.fandom.com/wiki/Jefferson_County_Middle_School_Marquee?oldid=100806"
Community content is available under CC-BY-SA unless otherwise noted.