Llamas are mammals indigenous to Peru. They are the main culprits in the Llama Incident.

In the year 2000, a man from Boston named Edwin Garner inherited all the llamas from his uncle Irwin's llama farm. He bought a ninety-nine seat theater in Danville called Equity Waiver for them. Fifteen years later, he had a whole string of theaters wherein he produced parodies of Broadway shows with his llamas as the cast.

Milo and Melissa attend a production of Llamalet. Well into the play, the llama playing Laratese wandered off-stage and tugged a rope holding stage lights up. The lights fell and startled all the llamas in the theater. The llama then stampede off the stage and into the audience. Milo's backpack gets caught on one of the llamas. Melissa and Milo chase the creatures all through town including through a production of Swan Llama, where more llamas join the stampede.

The chase leads onto a cargo ship that departs and sails to a glacier. There, Milo finally gets his backpack back. He uses his tee-shirt cannon of knock-out gas to subdue a polar bear. Milo and Melissa manipulate the unconscious bear like a puppet to scare the llamas in the other direction. After employing a dog sled, sea plane and public busses to get back to town, Milo decided to lure the llamas back to their theaters with a bag of pistachios. Then, a huge cylinder of pistachio gelatin falls on Melissa. The llamas then chase her into a Geckos vs. Tigers football game.

In "The Llama Incident", Milo tells Zack of the llama incident and the events described above.

In "Missing Milo", they carry a Pistachion to a football game while chasing Melissa who is covered in pistachio gelatin that Balthazar Cavendish and Vinnie Dakota spilled.

In "Perchance to Sleepwalk", some llamas are seen while Zack and Melissa are chasing after a sleepwalking Milo.

In "Managing Murphy's Law", Just Getting Started performs at the Forget the Llamas, Save the Alpacas benefit concert. 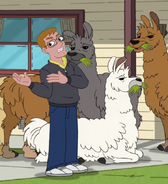