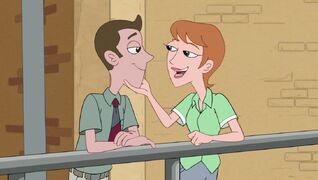 Martin Murphy and Brigette Murphy are a happily married couple with two children- a son and a daughter. They share a strong, loving relationship with each other.

Martin loves his wife dearly and enjoys spending time with her on a regular basis. He'd originally made his feelings for her clear when they went on their first date; he'd brought her an extra hazmat suit so she'd be safe in spite of Murphy's law.

Martin is excited to impress her, having gone through great lengths to show her a trophy he'd won back when he'd been in grade school. When he couldn't find the trophy itself, Martin ignored her protests and went over the top trying to demonstrate the winning play.

He jokes to Milo about Brigette calling the kitchen's dirty dishes 'the pile of hate in the sink', claiming she 'has a way with words'.

When they were younger, the two of them loved to participate in seventies style roller disco dancing but gave up their shared dream to win because of Murphy's Law. Martin later makes another attempt with Brigette, practicing their routine by Milo's instructions. He ended up enjoying himself alongside Brigette at the contest.

Brigette loves her husband dearly and enjoys spending time with him. She values his point of view when making decisions that affect the family, and called him about 'liability coverage' when Zack suggested they give Milo a surprise party.

Brigette is proud of Martin's accomplishments and was thrilled to learn that he'd won a trophy in spite of the fact that he couldn't show it to her personally. While she tried to prevent him from going through ridiculous lengths to find it in a trophy case, Brigette was still proud of him when he gave up his search, stating that 'he'd always be her hero' as she gave him a kiss.

Despite being as prepared as anyone in the Murphy family when it comes to Murphy's law, Brigette appreciates being able to work during the time she gets to herself, and uses her time away from Martin to complete any projects she doesn't want getting destroyed. She is not afraid of his condition, however, and never blames him for the incidents it causes. Instead, Brigette finds the spontaneity of their life together exciting.

When they were younger, Brigette and Martin shared a love for seventies style roller disco dancing but gave up their dreams of winning a competition because of Murphy's Law. When telling their children about this, Brigette expressed immense frustration about the four years of seventies style roller disco-dancing couple's therapy they'd gone to together. She agrees to try again and ends up enjoying herself as they go through the contest, however.

Add a photo to this gallery
Retrieved from "https://milomurphyslaw.fandom.com/wiki/Martin_and_Brigette%27s_Relationship?oldid=73945"
Community content is available under CC-BY-SA unless otherwise noted.