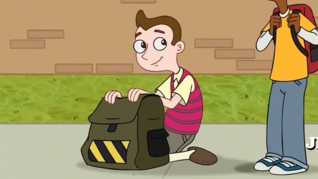 Milo's backpack is a constant - and seemingly bottomless - accessory of Milo's that contains a vast assortment of items to help him deal with the consequences of Murphy's Law. It originally belonged to Milo's last babysitter, Veronica. Milo seems to take great comfort in its presence, and is often afraid when it is not present.

It is a large, dark green backpack with black straps and small black pockets on either side. There are diagonal black and yellow stripes reminiscent of a caution sign on the back, beneath the opening flap.

Main article: List of items taken out of Milo's backpack