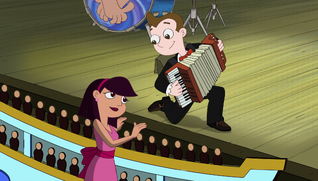 Milo Murphy and Amanda Lopez are classmates at Jefferson County Middle School. Milo's EHML and the chaos it attracts on a constant basis makes him a direct contrast to Amanda's obsession with organization and perfect order. This leads to her largely, but politely, avoiding him whenever possible. In spite of this, Milo is revealed to have a crush on her and enjoys spending time by her side. He is often trying to reassure her that things will be okay, often offering to help her out with her various projects with the help of the items in his backpack.

Amanda has since grown much fonder of Milo, and has come to really enjoy being around him. She's gone as far as to see the fun in Murphy's Law, and the extent of Milo's own preparedness for anything. She now enjoys spending time by his side as well.

This relationship evolves throughout several episodes in the 2 seasons of the show. It becomes a central focus in some of them, forming a story arc of its own.

Milo was revealed to have a crush on Amanda upon seeing her at the opera, which was something he quickly denied after Zack playfully teased him about it. His tendency to see things in a positive light and his confidence in his abilities leads him to ignore her concerns and reassure her things will be okay instead, offering to help whenever possible.

He treats Amanda's time and plans with great importance. After finding out how important her 'scheduled enjoyment hours' are to her, Milo spent the evening doing everything he could to keep the opera going as smooth as possible in spite of Murphy's Law getting in the way. He continues to set things right during the entirety of Amanda's carefully organized school dance and tries to convince her to relax and have fun throughout the event. He finally manages to do so after Amanda realizes he was the one who fixed up the school dance after it was wrecked, and in fact he made it better than ever. He accepts her invitation to dance after he finishes playing a song with his band and she agrees to wait for him, dancing to the band music and finally relaxing and having fun in the meantime.

After he's chosen as one of two contestants on Amanda's favorite TV show, Cake 'Splosion, Milo suggests Amanda as the second contestant, using her love for the show to convince the host, Basil Bravo, to agree. When Milo finds out she's worried about Murphy's law, he reassures her that he's going to load up his backpack more carefully than ever so that they would be prepared for anything that might come their way.

Milo rescues Amanda and saves their cake a number of times throughout the various events. By the end of them, the two of them begin working in perfect sync, leading to them winning the challenges and moving on to the final event. When he finds out the final event is rollerskating through an obstacle course, Milo begins to leave immediately, volunteering to sit out that round instead of participating so that Amanda can have a chance to win, but she quickly takes his arm and gentily stops him.

He's surprised when she reassures him that she'd rather have him around, because he's always so prepared, even getting a little choked up. With Milo's guidance, the two of them go through the obstacle course flawlessly together.

When Diogee trips them before they could make it to the finish line, Milo sincerely apologizes to Amanda, but cheers up after she tells him that she's had fun, even if they haven't won. After Basil Bravo tastes their cake and praises the way it was delivered, he suddenly announces them the winners. Amanda quickly grabs him for a huge hug, and Milo appears stunned for a moment before his face is overtaken by a deep blush and a wide smile.

After Amanda becomes the manager of his band and the group tries to determine a name for themselves, Milo states that he likes the name 'Just Getting Started' more when Amanda says it.

In spite of all her efforts to keep their concert preparations going smoothly despite the appearance pf Murphy's Law, Milo tries to suggest to her that, in light of recent events, it might be best if they give up. She quickly refuses, explaining that she's learned from Milo to never quit no matter what, saying they should 'Milo up'. Later, he compliments her work as their manager, prompting her to state that the job may be tough, but he's worth it. Afterward Milo smiles and blushes when Amanda suddenly kisses him on the cheek saying that they're 'just getting started'.

Having ended up in the school basement before he could collect his award during the student award ceremony, Milo tries and fails to escape the room by scaling one of the walls with a pickaxe. He's surprised when Amanda finds him and suddenly catches him after he falls, telling him there's an elevator.

Milo is grateful when he finds out that Amanda had picked up his award for him after the show, saying how nice it was of her, and asks her what the award was for. He watches her present his award at the mic and approaches her on the stage to receive the award in front of his cheering family, smiling when she kisses him on the cheek.

During Zack's cast party, Milo is quick to choose Amanda as the first person to tell her story, claiming it was great, which Amanda is flattered by.

Amanda, like most of the other people in Milo's life, largely avoided Milo over Murphy's Law. Her love of organization made her even more nervous about his condition, and she clearly expressed her discomfort about being in his presence on a number of occasions. She was reluctant to go to his party when Melissa invited her, only agreeing when Melissa said color coordination wasn't important, and upon finding out that Milo would be at the same opera she was going to she voiced her concerns about Murphy's Law as gentily and politely as possible.

This came to a sharp turning point, however, when Murphy's Law destroyed her carefully organized school dance, leading to her lying on the floor in despair. Rather than finding the party ruined, Amanda was shocked to see that the entire room had not only been fixed, but vastly improved by the time the lights returned. She promptly but shyly asked Milo to dance upon finding out that he'd been the one to fix the party and has since been much more relaxed in his presence.

Amanda put a lot of effort into trying to help Milo get a school photo for the yearbook, letting him know the time it was due and even holding the presses until the last minute so he could get back on time. She expresses deep disappointment and even apologizes when he comes back unsuccessful, and was equally happy when Chad managed to get a decent picture of him.

At first she was delighted at having been selected as his partner to compete in her favorite TV show, Cake 'Splosion!, but her excitement vanished when she remembered Murphy's Law and the potential for everything to go wrong. Her enthusiasm faded after this, even at Milo's reassurance, and Amanda refused to let him even say the words 'Murphy's Law' for the entire event, even suggesting he act as her 'prep chef' so that he'd have to work on the other side of the kitchen.

As the event continues, however, Amanda watches Milo save their team time and time again, and even relaxes enough to enjoy herself while they make their cake as she realizes just how prepared he is. By the third event they are working in perfect sync.

By the final event, Amanda stops Milo from leaving and tells him that, regardless of what happens, it's better having him around, causing him to choke up a bit. After Diogee causes them to fall before they can make the finish line, she reassures Milo that she didn't mind losing because being on the event with him was the most fun she'd ever had. When Basil Bravo suddenly announces them as the winners anyway, Amanda jumps up and hugs Milo in delight, causing him to blush.

Amanda later appoints herself as the manager of Just Getting Started and does all she can to keep their preparations going smoothly. In spite of the constant Murphy's Law related interruptions, she is persistent in making sure that they perform for charity, saying that she learned from Milo himself to never quit no matter what. She even says they should 'Milo Up'.

When Milo suggests that it might be best to give up in light of recent events, Amanda passionately refuses and states that she'd learned from Milo that they should never give up, even going as far as to say they needed to 'Milo Up'. After a successful performance, she admits that being a band manager is tougher than she expected, but that Milo is worth it and that they were 'just getting started'. She then kisses him on the cheek, he then blushes.

At school before a robot building contest, Milo walks away after having had a moment with Joni, only for Amanda to suddenly grab her, and shake her harshly as she states the words 'He's Mine!' repeatedly.

During the school's student award show, Amanda saves seats for Milo's family. She's thrilled when his name is called for an award, but quickly becomes worried when he fails to show up on time to receive it. She eventually leaves the auditorium to collect his award and find out where he'd gone. Finding him in the basement, Amanda saves Milo, catching him just before he hits the ground. She points out the elevator located near the concrete wall he'd previously been trying to scale.

After leading him to the stage, Amanda uses the mic to present Milo with his award in front of his cheering family, announcing the award for 'greatest perseverance' before kissing him on the cheek, all but confirming she now has a crush on him.

Romantic hints to Milo and Amanda

It is quite evident that Milo has a crush on Amanda. He cares deeply for her, is willing to fight Murphy's law so that her enjoyment won't be ruined and gets excited when he sees her. While initially hesitant, Amanda has warmed up to Milo over the course of the series and begun to reciprocate his feelings as well. Here are a few hints at this pairing (Note: Shipping hints can be very subjective. One person's hints are another's average, friendly moment):