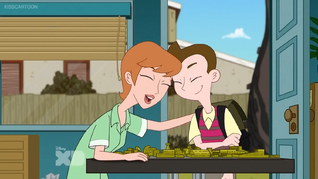 Milo Murphy and Brigette Murphy are close, with Milo being the youngest of Brigette's two children. She supports her son in any way she can, and he goes to her for advice when he needs it.

Milo loves his mother and enjoys spending time with her, going to her for advice when he's troubled. At the end of career day, he went to her to ask about his future, admitting the problems he was having choosing a career. He took her encouragement to heart and gave her a hug after she told him that he'd be extraordinary no matter what he chose to do.

Brigette loves her son and enjoys spending time with him on a daily basis. As his mother, she doesn't put stress on him to be anything more then what he is and gives him sound advice when he needs it.

Brigette has high hopes that Milo will get a good picture during school photo day, and expresses this to him before he goes to his classes. When he comes home without having had any luck, Brigette isn't perturbed, and instead says that she's grateful to have the real thing.

She was thrilled when Milo was selected to be a contestant in the TV show Cake 'Splosion!, and came to the event with pom-poms to cheer him on alongside Sara, Melissa, and Zack.

While she trusts him to take care of himself on his own through his day to day routine, Brigette still shows concern if Milo is less prepared then she expects him to be. She puts a lot of effort into ensuring her son's safety, in spite of Murphy's Law.

Retrieved from "https://milomurphyslaw.fandom.com/wiki/Milo_and_Brigette%27s_Relationship?oldid=76575"
Community content is available under CC-BY-SA unless otherwise noted.