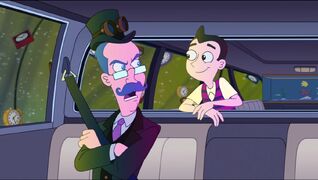 Milo Murphy and Balthazar Cavendish's relationship had a rough start after Murphy's Law caused the time traveler to fail a number of missions. Once the misunderstanding between them was resolved, however, the two became friends, with Cavendish having warmed up to the boy.

Milo remained largely oblivious to Cavendish's disdain for him, treating him well despite his rude attitude and constant suspicion. Milo is always happy to see him and tends to greet Cavendish whenever they cross paths.

After initially thinking of Milo as merely another customer, Cavendish was quick to jump to the conclusion of Milo being a counter-agent sent to thwart his pistachio-based missions. In response to this assumption, Cavendish went on to treat Milo in a very rude, condescending manner, often grilling him in spite of his attempts at being friendly.

As of "Missing Milo", their one-sided rivalry has been amended, and Cavendish has taken a strong liking to the boy. He cares about Milo's wellbeing and trusts his abilities in dangerous situations.

Add a photo to this gallery
Retrieved from "https://milomurphyslaw.fandom.com/wiki/Milo_and_Cavendish%27s_Relationship?oldid=79996"
Community content is available under CC-BY-SA unless otherwise noted.