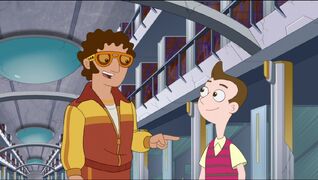 Milo Murphy and Vinnie Dakota began on good terms even with Cavendish's constant suspicion of the boy. The two of them were quick to become friends, and Dakota has remained largely protective of Milo in dangerous situations.

Milo is always happy to see him and tends to greet Dakota whenever they cross paths.

Dakota spent much of Cavendish's rivalry with Milo defending the boy and treating him well, much to his partner's annoyance. After the events of "Missing Milo", Dakota has taken a strong liking to Milo, gifting him a clock from the Time Stream to remember them by after they left. He puts a lot of effort into ensuring Milo's safety during their adventures.

Add a photo to this gallery
Retrieved from "https://milomurphyslaw.fandom.com/wiki/Milo_and_Dakota%27s_Relationship?oldid=77891"
Community content is available under CC-BY-SA unless otherwise noted.