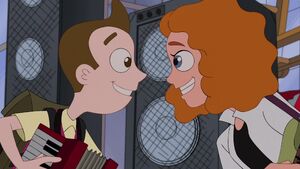 Milo Murphy and Melissa Chase are best friends who have basically grown up together. They've known each other ever since the first day of first grade, as shown in "First Impressions". As one of the few people outside of family who wasn't afraid to spend time around Milo, Melissa remained his closest and most supportive friend for most of his life before Zack joined their group and treasures their friendship.

Having been friends for so long there are many traditions, past adventures, and inside jokes between them, with one of the most prominent being the Llama Incident. They have a special fist bump that they've done on several occasions.

According to staff writer Joshua Pruett, Milo and Melissa will not enter into a romantic relationship with each other, and will remain in a strong best friendship.[1]

Milo is close friends with Melissa and enjoys spending time with her. Like Melissa, Milo often referenced 'The Llama incident' on a constant basis, fondly remembering it as one of their biggest adventures together before they met Zack.

Milo and Melissa shared a not-football-Friday tradition for quite some time together, doing activities ranging from bowling to cards. After finding out he was allowed to attend the school's football game for once, Milo gets ready for the game while expressing his excitement to Melissa, and turns down her offer to go to the Pistachio warehouse instead. When the game ends and Milo ends up in the hospital with a severely broken thumb, the two of them hang out in the Murphy suite while he recovers.

When Melissa tricks him into thinking she had a sprain, Milo was quick to help her out at her request. He stops what he's doing to deliver a package for her dad, reminding her of all the times she'd helped him after he'd sprained something. He's delighted when he finds out later that it had been for his surprise party, and even laughs about how she'd used the 'doe eyes' on him.

He thinks very highly of Melissa and was surprised to find out that she had a fear of roller coasters after having seen her overcome so many more significant challenges. After this discovery, he agrees to face one of his own fears to help her overcome hers, and succeeds in quelling her fear after the two of them survive a ride on the roller coaster through Murphy's Law together.

In spite of having been friends for so long, Milo didn't tell Melissa about his backpack's origins until the subject came up while they were hanging out with Zack one evening. Likewise, he didn't know about her false front teeth until then.

Milo often references their past adventures together happily, most notably bringing up the llama incident before they'd told Zack the story. He considers it a major adventure of theirs and ignored the potential to fall to their doom long enough to tell Zack the story after he'd finally asked, happily recalling the events of the incident he'd mentioned a number of times previously.

Milo was quick to give up on getting a good school photo for the yearbook but instead spent the day trying again and again to get one after Melissa refused to give in to Murphy's Law. When they returned to school unsuccessful, Milo decides that he didn't need a photo when he 'got to spend a day full of great memories made with the best friends in the world' while hugging both of them.

When Melissa complains about restrictions on potentially life-threatening activities ruining all her fun, 'again', Milo reminds her that she was only seven during the incident she was complaining about, and that they weren't going to let her into a shark cage at that age. Melissa stated she was ready to go in anyway.

When Milo is being abducted by the Octalians, Melissa holds on to Milo with all of her strength. When she loses him, she is the one to encourage everyone to go and find him.

Melissa has a very high opinion of Milo and enjoys spending time with him. She's not afraid of Murphy's Law and in contrast, has complete faith in Milo's ability to get them through any situation thrown their way. On occasion, Melissa's faith in Milo exceeds even his own confidence, and she constantly encourages him and works to help him through anything.

Throughout their lives, Melissa has dedicated her time and resources to keeping a complete record of their adventures together, documenting Murphy's Law through a huge collection of photos, data, and objects previously belonging to Milo. She began her research as an attempt to help Milo by finding a cure for Murphy's Law, but over time she came to realize that he loves living with it and that he would never want to 'fix' his condition. In spite of this realization, she continues to collect data and keeps it in a secret room in her basement.

Her determination to help Milo is strong even in spite of her having given up on finding a cure. When she found out that he could fail seventh grade for losing his doctor's note, Melissa refused to let him give up, even going as far as to give an inspirational speech to motivate her friends into continuing their search for the note.

She has full confidence in her ability to survive Murphy's law while staying close to Milo, and is able to judge even the most minuscule distances to keep herself from being swept up in the 'splatter zone'. Melissa will often sit just a calculated arms-length apart from him, or stand just out of reach as Milo and Zack are chased away by an oncoming disaster. Whenever she does end up on the adventure, Melissa tends to enjoy it and keeps a record of it on her phone.

When something she considers important comes up, however, Melissa isn't afraid to ask Milo to keep his distance. This can be seen when she reminds Milo that she needed to get the egg for their group project, prompting him to move to the corner of the room so she could do so without interference from Murphy's law.

On his birthday, she put a lot of effort into helping to prepare a surprise party, having previously been the only person invited to his birthdays aside from his immediate family. Melissa used her 'doe eyes' when asking his help in delivering a package for her dad, even pretending she'd sprained her wrist as part of the ploy. She then slows him down further by calling up Elliot to distract him, and eventually meets him at his own party to surprise him.

On the occasion that Milo can't participate in something because of his condition, such as agreeing to avoid the school's Friday football games, Melissa puts effort into finding other things for them to do. Originally, she took him bowling each week but eventually changed the activity to something safer.

She constantly defends Milo against others when they treat him bad, even going as far as to berate her own dad whenever he's rude to Milo. She calls her classmates cowards when they refuse to work on a group project with him, and she scolds Elliot for his cruel-hearted exclamation that the world would be a better place without Milo.

After watching Milo get chased away by a giant snowball while waiting for the school bus, she makes another bet with Bradley that he'll make it to school on time. Rather than maintaining her confidence and focusing on the bet as she had earlier that year, however, she becomes progressively more worried as Milo fails to show up on time, and celebrates when he uses time travel to make it before the bell rang.

Once again, Melissa shows herself to be determined to fight against Murphy's law when she decides that they're getting Milo's school picture no matter what, and even argues against Milo after he gives up. Initially, she tries to take the picture herself, and then works alongside Zack and Milo spending the rest of the day trying to get the photo. When they're forced to come back to school after failing to get a picture, she's disappointed that they failed, but smiles when Milo says 'who needs a photo when they could have a day full of great memories made with the best friends in the world'.

Melissa is very grateful when Milo states that he wanted to help fix Ol' Bessie with her, and she promptly recruits him, alongside Zack, to work on the clock. After meeting Victor Verliezer while working on the clock tower, Zack expresses shock at seeing Milo so angry. In response, Melissa states that she'd seen him like that before, after some squirrels ran off with his sandwich.

When Milo was sick, Melissa went to his house alongside Zack to deliver his homework. Before leaving again, she peeks back into his room and tells him to feel better soon, and that it was boring without him.

After the two of them find out that Zack was going to spend the day doing farm chores, Melissa was deeply amused, and immediately expressed her amusement to Milo. While helping Zack at the farm, the two of them continuously laugh about his predicaments, as both of them seemed to know a little more about farm life then Zack.

While everyone is sharing their point of view on how they think Milo sees the world, Melissa gives her view on everyone else's stories, arguing against Bradley's claim that Milo was a supervillain, and outright denying Chad's belief that Milo could see ghosts.

When her turn comes around, she explains that she used to wonder if Milo was more like a robot, and calls him 'The Milo-nator'. She attributes this to his ability to make impossibly quick decisions moments before anything huge happens, claiming that he's so good at what he does that it's as if time stops for him. Afterward, when Neal expresses shock upon seeing Milo's abilities for himself, Melissa responds with 'This is Milo's world. You're just living in it'.

After visiting Milo's house with Zack and finding out that the 'Milo' that had been with them was actually an android, Melissa was the first to realize that the replacement had been made because somebody didn't want them to know that Milo was missing. Like the others, she becomes determined to find Milo and promptly assigns Doofenshmirtz the task of making the android speak. Melissa helps in interrogating the robot over Milo's whereabouts and then treks out to the forest to find him, finally rescuing him at the last minute.

Moments between Milo and Melissa