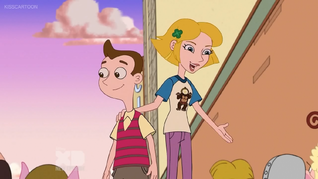 Milo Murphy and Sara Murphy are close siblings, with Sara being the eldest of the two. While Murphy's Law causes Sara a lot of apprehension around her younger brother, the two of them do care deeply about each other.

They enjoy spending time together and share a strong love for the television series The Doctor Zone Files.

Milo cares deeply for his older sister, and he puts a lot of effort into making sure Murphy's law doesn't interfere with her plans. This was made clear when he did everything he could to keep Murphy's Law from interfering with the date she had with Neal.

A running gag in the series has Milo putting Sara second to other stuff he holds dear. This is seen in the episode "Missing Milo", when, upon being reunited with his friends, he shouted Sara's name after backpack, or again in "Fungus Among Us" when he chased an abducted Sara into the Pistachion prison, but only claimed the situation had gotten personal after seeing what the Pistachions had done to Lard World.

While Sara cares deeply for her younger brother and enjoys spending time with him, her paranoia over potential Murphy's Law related disasters causes her to be overly cautious around him. At times her stress causes her to treat him too carefully, as seen when she suggests that he should go and stand in an empty dirt lot to prevent them from losing their movie tickets, and again with her constant use of a hazmat suit.

Despite her worry over Murphy's Law, Sara loves spending time with Milo and will go out of her way to ensure the constant disasters don't prevent her from hanging out with her younger brother.

Add a photo to this gallery
Retrieved from "https://milomurphyslaw.fandom.com/wiki/Milo_and_Sara%27s_Relationship?oldid=80280"
Community content is available under CC-BY-SA unless otherwise noted.