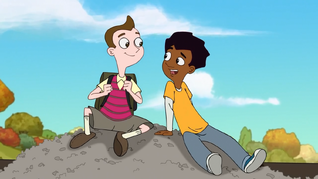 Milo Murphy and Zack Underwood are best friends. While Zack didn't initially want to spend time around Milo over his condition, Milo's optimistic attitude won him over, and the two of them have been close friends ever since.

Milo considers Zack one of his best friends and enjoys spending time with him. He considers Zack 'the cautious one' and has called him such. When the group is heading into dangerous territory and Melissa expresses her concern about the potential risks, Milo points out the fact that Zack isn't worried, implying he puts weight on Zack's attitude.

Waiting at the bus stop on the way to school, Milo states that he likes Zack's attitude when the latter says that he's going to put a positive spin on everything that day. After a number of Murphy's Law related disasters lands them both in a whale's mouth, Milo is quick to reassure Zack that it's alright to be afraid, and then admits that he's impressed by Zack's determination and that personally, he was freaking out.

Milo was the first person Zack met upon moving to Jefferson County Middle School, and he was initially intrigued by the fact that the other kids immediately avoided Milo when he arrived at the bus stop. He was quick to guess the 'J-word' Milo hinted at after the two of them avoided a series of disasters, and Zack eventually decided that he, too, would avoid Milo over his condition, claiming he couldn't handle it and that he would rather keep his distance.

His point of view on Murphy's law changed after Milo pointed out how much more exciting their trip had been as opposed to riding the bus, and the two of them have been close friends ever since.

During class, Zack tends to spend more time dealing with Murphy's law alongside Milo then anyone, as Melissa has much more experience with it and often leaves him to his fate. He's well aware of this predicament and doesn't seem to mind it beyond knowing the inevitable risk. When Milo, acting as a teacher's aid, requests an assistant, the entire class looks at Zack, who predicts as much without even looking at them.

In spite of his cautious attitude, Zack feels that Milo should be able to enjoy the same things other kids do. After finding out that Milo's birthday parties consist only of his family and Melissa, he points out how sad that was, and asks Brigette if they could throw him a large surprise party instead.

Zack loves spending time with Milo and tends to enjoy the excitement of their adventures even with the worry and panic he feels while they're happening. After surviving a deadly adventure in Milo's Scream-A-Torium together, the two of them cheerfully reminisce about how terrifying it had been while they share an elaborate high five.

More often then not, their high fives don't work out, with Zack getting hit in the face on one occasion, and both simply failing to decide on whether to fist bump or high five on another. In contrast, however, their attempts work out fine on other occasions.

While waiting with Milo at the bus stop on the way to school, Zack decides that he's going to put a positive spin on everything, claiming that it was what Milo did. After a number of Murphy's Law related disasters lands them in a whale's mouth, he admits to Milo that he's scared, and then takes the latter's advice to heart when he tells him that it's alright to be afraid, as long as you didn't let the fear stop you.

After finding out that Milo could never get a proper photo on school picture day, Zack spends the day alongside Melissa and Milo trying to get him a decent school photo, even taking them to the airport so that his cousin could try. Zack is disappointed that they failed at the end of the day, but smiles when Milo says 'who needs a photo when they could have a day full of great memories made with the best friends in the world'. In response, however, Zack frowns and says 'you meant us, right?'.

When Milo was sick, Zack delivered their homework to his house with Melissa. Before arriving, he complains to Melissa that he'd actually had to take the bus to school that day and that he was boring himself just talking about it.

While everyone is sharing their point of view on how they think Milo sees the world, Zack begins by stating that he saw Milo as some kind of wizard whose entire life is like a quest. After talking about Milo's dedication to picking up a comic book for his sister, Zack states to Melissa, 'Always thinking about others, our Milo'. At the end of his story, Zack claims that no task is impossible for him, and refers to him as 'Milo the Great'.

After visiting Milo's house with Melissa and finding out that the 'Milo' that had been with them was actually an android, Zack works with the others to find out what had happened to the real Milo, and to get him back. He travels out to the forest with the others while tracking Milo, and ends up saving him at the last second.

Retrieved from "https://milomurphyslaw.fandom.com/wiki/Milo_and_Zack%27s_Relationship?oldid=76578"
Community content is available under CC-BY-SA unless otherwise noted.