When Cavendish and Dakota stop Milo from destroying a pistachio plant, they change the future. Pistachio plants survive, become sentient, and take over the planet.

"Missing Milo" is the 23rd episode of the first season of Milo Murphy's Law. It is the first hour-long special of this show.

Cavendish and Dakota have finally succeeded saving a pistachio plant after preventing Milo from destroying it. However, they discover this specific plant has been mutated and would change the future in a negative light, as Cavendish, Dakota and Milo travel to 2175 to discover that the plant would grow into a sentient pistachio plant named King Pistachion, spawn a whole army of mutated Pistachions and take over the world. As Dakota, Cavendish and Milo desperately try to escape the Pistachions and go back to the present and destroy the young plant, Melissa, Zack and Sara try to find Milo in the present as he went missing, getting even more confused when Milo shows up in the lost Dr. Zone episode from 50 years back.

After Milo, Melissa and Zack narrowly avoid an oncoming wave of lava by riding a block of ice pulled by chinchillas, a bike missing the back tire, and skis leaving small sparks. Milo volunteers to swing by the grocery store to pick up replacement snacks.

On the way, he encounters Dakota and Cavendish checking on a pistachio seedling. They ask if Milo was trying to thwart them. Milo denies it and explains Murphy's Law to them. As Milo fixes his bike, they contact Mr. Block to tell him they succeeded in their mission. As they are talking to Mr. Block, he is attacked and they wonder if something's wrong or if Mr. Block is pranking them. They decide to seek out Brick and Savannah to borrow their time limo and interrupt Brick and Savannah's mission to help end the common cold. They refuse to loan their time vehicle. As Milo arrives the ledge beneath Brick and Savannah fails and they fall off a cliff and into the sea.

Milo returns the temporal communicator that Cavendish dropped by his school. As he does, he gets trapped in the time machine and ends up going with them, leaving his backpack and Diogee in the present. Zack and Melissa search in vain for Milo, unaware that he is now lost in time. The time-traveling trio land in Cavendish and Dakota's time of 2175 to find it overrun by Pistachions.

Milo, Dakota, and Cavendish decide to go to the Bureau of Time Travel and try to make sense of what has happened. Along the way a peach hits Cavendish, causing all three to realize they nearly walked into some marching Pistachions and they hide before they are seen. They are eventually discovered and run.

In the present, Zack and Melissa are led by Diogee to Milo's backpack, where they encounter Brick and Savannah who try and interrogate them. The three flee with the time travelers hot on their tails. Zack and Melissa run down a storm drain and nearly escape only to be cornered by the agents. However, Scott appears, and Zack and Melissa go with him to Subterranus, but Brick and Savannah are still hot on their trail. Scott tries to collapse a house on the agents, but they escape the rubble before meeting their targets at a trapdoor. They are hit with a sign then roll into a pit where they are overwhelmed by rats and a wolf. Scott leads the kids back to the surface, then talks to his milk carton friend.

In the future, Milo, Dakota, and Cavendish — still running from the Pistachions — hot-wire a hovercraft elevator and use it to get to their time machine and escape. Back in the present, Zack and Melissa head to Milo's house where they get Sara involved in the search. They see Milo on the newly found fifty-year-old pilot episode of Doctor Zone. They are shocked and desperate for answers.

In the future, King Pistachion takes his own time machine and six goons to try and intercept the trio.

Cavendish, Dakota, and Milo send themselves ten minutes into the past to search for answers. They see themselves walking into oncoming troops and throw a peach to warn themselves. They realize it was they who saved themselves and this opens a debate of where the peach came from. In the present, Melissa takes Sara and Zack to her house and shows them her Murphy's Law room, a room dedicated to documenting Murphy's Law. Looking for clues, they notice Cavendish and Dakota in the background of many of the pictures.

The time-traveling trio then makes it to a library and learn that the plant they saved was King Pistachion's seedling. They escape an ambush thanks to Murphy's Law and return to the time machine. King Pistachion and six of his goons follow in their own time machine. Milo gives Cavendish (who's driving the time limo) directions that lead them to the llama incident to temporarily throw the Pistachions off their trail.

Sara offers to take her friends to someone who can help. She takes Melissa and Zack to the home of Orton Mahlson to get answers about Milo being on the 1965 program. Orton tells his guests that the time travelers inspired his show and Milo gave him a letter to give to curious folks after fifty years, telling them to meet him at school with his backpack at three in the afternoon on that day.

As Milo and the time travelers head for the present, he is attacked in the time stream by a Pistachion, but Dakota knocks it off with his bag of clocks. As Sara and the others reach the middle school, a space-time portal opens up, scaring Elliot away and revealing the Pistachions. They try to attack with the three hedge-trimmers but they all break. Moments later Milo shows up. As Melissa is throwing Milo his backpack, a Pistachion parries it to the flagpole. They get in the time machine and try to destroy the plant by running it over while the Pistachions chase after them, but King Pistachion defends his seedling self and after they drive through much of the school he corners them and, with the help of his children, tears the time limo in half to prevent anyone from doing any more time-traveling.

The six escape, and the Pistachions are temporarily subdued by bubbles. Milo gives the humans random equipment from his backpack. He gives Cavendish and Dakota a catapult, five bowling balls, and a sink from the girls' bathroom they drove through, Zack a piano winch and cable snares, Sara a triple extra-large straitjacket, and Melissa wind chimes and a self-inflating air mattress. They hold back the Pistachions while Milo sets out to destroy the small plant. With their items, the humans are able to detain any Pistachion that is in Milo's path or that they come across, but they run out of ideas when King Pistachion confronts them. Milo is pulling the pistachio sapling when he sees everyone has been captured by the king (as a cliché leverage). He backs away, then blows his woodpecker whistle to summon woodpeckers to attack King Pistachion like mosquitoes. This hole-ridden monster falls off the roof he was standing on and Milo is able to catch his friends with the air-mattress, but the king reaches Milo before he can get back to the tiny pistachio tree. As the king is about to claim victory, Diogee pees on the plant, killing it and thus saving the future. The Pistachions and their time machine all disappear, as they will never be created.

Mr. Block has no memories of the bad future, since the space-time continuum was fixed, and sees the epic story as an odd attempt by Dakota and Cavendish to get out of pistachio-protecting duty. The time travelers part on good terms with Milo and company before running into Brick and Savannah and giving them back the keys to their destroyed time limo, much to their dismay. Zack tells Milo of Melissa's special room. When Milo asks his friends and sister how they knew of his where- and when-abouts, they show him the Doctor Zone pilot episode and the old letter. They all wonder why he will go to 1965 in the first place. Back in the time stream, the Pistachion that Dakota hit with clocks lands in a 1955 town fair and gives an evil laugh.

Then "THE END?" appears on the screen.

For a full transcript of "Missing Milo", click here. 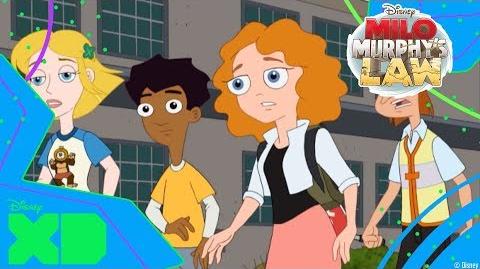