Variations of the theme reoccur throughout the episode giving a light and airy feel to the story.

Well we don't know where we're going,
And we got no ETA.
No itinerary, compass, map or scheduled agenda,
But at least we're on our way.
We gotta a mini fridge filled with electrolytes,
For when we feel the need to replenish.
And a funky foreign second hand GPS,
That only speaks to us in Flemish.

Whoa oh oh oh,
It's the Murphy family vacation.
Things can be expected,
Even in the best of weather.
Whoa oh oh oh, oh,
The journey is the destination.
We can handle complications,
As long as we're together.

So let's hit the road! 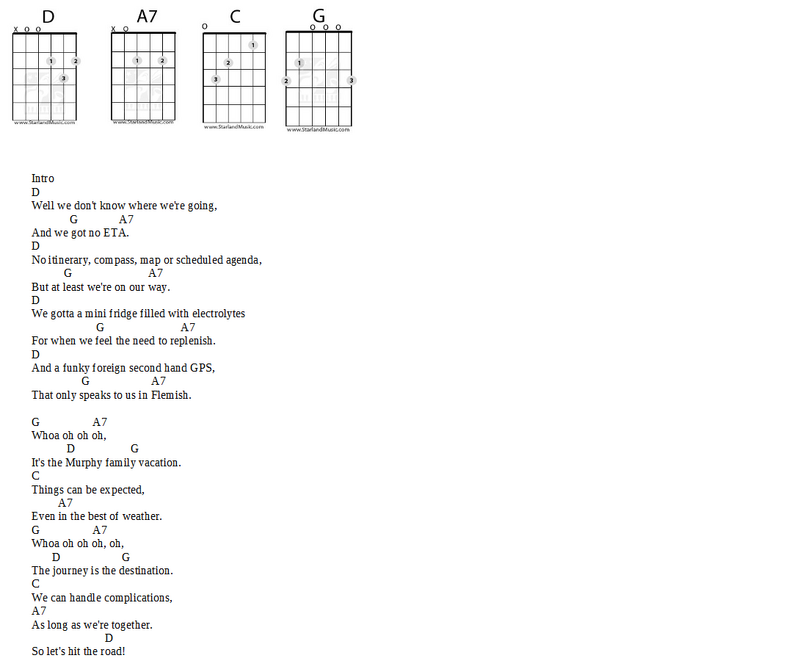 It is advisable to listen to the intro several times to pick up on the accents that are not noted here.
The intro is basically a stylized variation of the song.
It is played using 4th string root movable major chords.

So if a lower case letter is a single note, An upper case letter is the movable chord, a hyphen is a slide, a comma is a rest and spaces are just to spread it all out for clarity, it goes something like;

Then go to the first verse of the song.

Retrieved from "https://milomurphyslaw.fandom.com/wiki/Murphy_Family_Vacation?oldid=98138"
Community content is available under CC-BY-SA unless otherwise noted.