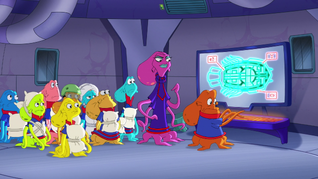 The Octalians are a race of extraterrestrial cephalopods from the planet Octalia. They've taken an interest in Milo Murphy over his Negative Probability Ions.

Octalians have the appearance of humanoid octopuses. The species has four upper tentacles that function much like human arms. Likewise, their lower tentacles function similar to human legs. The back of their heads extend into a large, bulbous mantle, and there is a small siphon-like funnel on either side of their faces, mimicking the human's ear placement.

The species has vibrant coloring, notably coming in colors such as bright magenta and deep orange.

The Octalians aboard the Octalian Ship wear outfits akin to uniforms, colored blue with red highlights. These outfits extend from just beneath their heads to the area immediately above their lower tentacles, with a pair of sleeves on each side of their chests for their upper tentacles.

The Octalians have skills and abilities unique to their species, which they utilize when studying Milo Murphy.

In "Managing Murphy's Law", an Octalian ship doing a routine scan of the planet detects Milo Murphy thanks to Murphy's Law. Two octalians proceed to study him before deciding they'll return later.

In "Milo's Shadow", the Octalian Commander gave the order that a human needed to be 'removed from the equation' after deciding that he knew too much about aliens. Before they could eliminate him, however, they're hit by a beam that causes their ship to begin returning to their home planet.

In "Sick Day", the Octalians succeed in gathering a tissue sample from Milo Murphy, having snuck through his house to get it. After scanning the sample, their suspicions about his negative probability ions are confirmed and they decide that they're going to abduct him.

In "Abducting Murphy Law", the Octalians send an android created using Milo's DNA to his house in order to delay the discovery that he was missing. They succeed in abducting Milo but end up scattering when Murphy's Law causes damage to the ship, allowing him time to escape into the vents. Four Octalians are sent to find him, and are instead rescued by him in the midst of the chaos caused by Murphy's Law. Eventually, they explain their intentions, and the Alien commander decides that Milo is 'their only hope', and that they were bringing him across the universe to their home planet. Instead, they're forced to escape the ship when Murphy's Law sets it on a collision course to Earth and causes Milo to fall out into open air.

Retrieved from "https://milomurphyslaw.fandom.com/wiki/Octalian?oldid=65162"
Community content is available under CC-BY-SA unless otherwise noted.