It's picture day and Milo reveals that he's never successfully had a school photo because of Murphy's Law!

"Picture Day" is the fourth episode of the second season of Milo Murphy's Law.

It's 'Picture Day' at school and Milo has never gotten a single good photo for the year book, so he, Melissa, and Zack decide to change that this year. Meanwhile, Dakota and Cavendish, after getting fired from the B.O.T.T., learn they'll be hired by an organization known as P.I.G.

Milo is ready for picture day and his mother is hoping for a good one this year. Moments later, Dr. Doofenshmirtz walks by, saying that the shower is free; a disgusted Brigette decides to use the one in the RV.

At the Strip Mall, Cavendish and Dakota are packing for vacation in Hawaii when they receive a call from Bob Block, Mr. Block's ancestor, who got them jobs at P.I.G. when they get back.

At Jefferson County Middle School, students are lining up for pictures and Chad overhears Milo saying "it's almost like I don't show up on film." Believing him to be a vampire. he recruits Mort to help him find proof. Just as Milo is about to have his picture taken, the photographer, remembering him from last year, runs away and Murphy's Law keeps him from taking pictures.

At the airport Cavendish and Dakota are wondering what P.I.G. stands for (Dakota thinks it's "Pigs In a Glanket"). Cavendish looks it up and learns it stands for "Paranormal Investigation Group," meaning they will be paranormal investigators, much to his delight.

Zack suggests going to the airport, as his cousin Zelda never fails to take a picture. As they head there, Mort & Chad wait to ambush Milo with balloons filled with garlic water to prove he's a vampire. However, Murphy's Law takes effect, popping all the balloons, the three watch Chad and Mort being washed away by a wave of garlic water. They meet up with Zack's cousin to take the picture, but Chad and Mort hold up a mirror and the flash reflects off of them and causes a cart to crash into a crate, releasing Zippy, the world's fastest koala. Meanwhile, Dakota & Cavendish are waiting in line for their plane (and Cavendish learns there is such a thing as a "glanket"), but Zippy's escape causes confusion, resulting in the former time travelers going to Nepal by accident. The trio are asked to identify the culprit at the Police Station and they plan to get Milo's picture via his mugshot. However, before they can, the station's canine unit chases a cat, and they destroy the camera.

In the Himalayas, Cavendish and Dakota are freezing in the mountains until they find a Yeti and try to take its' picture with no success until it takes a selfie.

The trio spend the rest of the day trying to get a pic at the DMV, a wedding, and a movie premiere, all with no success. They return to school empty handed until Chad and Mort jump out and take a barrage of pictures; Chad takes one, but upon seeing that Milo's not a vampire, decides to delete it. Before he can, Cavendish crashes into him and the two inadvertently switch phones. Amanda tells Chad to send the picture to her, and he does.

At the strip mall, Cavendish shows Block the picture of the Yeti, but he replies "okay I'll bite, who's the kid?" causing them to realize they got the wrong phone. Cavendish explains they found out what P.I.G stands for, but he tells them that they will be in the janitorial division (Purveyors of Intergalactic Garbage), and not actual agents since "we have competent people for that."

Back home Milo and Brigette look at the yeti picture and hope that he can take a better one next year. Doof then walks by again, saying he's done with the shower in the RV.

For a full transcript of "Picture Day", click here. 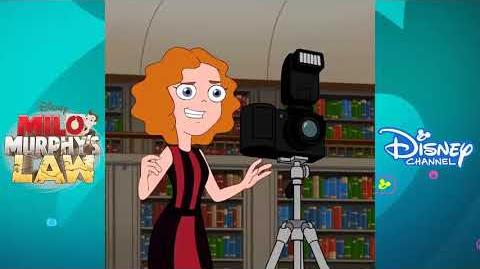