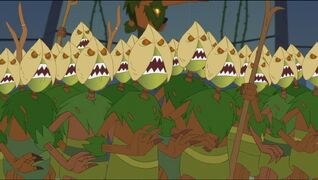 The Pistachions (sometimes spelled as Pistashions) are a race of sentient, humanoid pistachio plants led first by King Pistachion, then later by Derek. They are determined to overthrow the human race, and are the main antagonists of the Pistachions Arc, specifically in "Missing Milo", "Fungus Among Us" and "The Phineas and Ferb Effect". They have been defeated and eradicated since.

The Pistachions resemble giant, humanoid pistachio plants, with their faces most closely resembling the pistachio nut itself. Regular Pistachions are larger than humans, with relatively thick, branch-like bodies. They tend to be brown in color, with green highlights around the waist area and thick foliage growing around their shoulders and elbows. The wood of their lower legs and feet is thicker and darker in color than that of the rest of their bodies, and they have large, red eyes and sharp teeth.

As sprouts, they're much smaller than regular pistachions; barely the size of a human hand, although they still resemble the older members of their species. They retain these forms throughout their youth, simply growing in size rather than appearance.

Both King Pistachion and Derek eventually became full sized Pistachions. At this size, they become much larger than their kin, and their forms become more slender by comparison, with the majority of their leaves gathering around the chest area. A large clump of foliage grows from the top of their pistachio heads.

The Pistachions have a variety of skills and abilities unique to their species, which they utilize in their attempts at overthrowing the human race.

They are vulnerable to uric acid, as well as environment-unfriendly orange soda like that of the discontinued brand of Wyatt Burp. Both generations have therefore been eradicated using dog pee and orange soda, respectively.

In "The Substitute", Milo accidentally created a sentient blob by pouring futuristic pistachio fertilizer owned by Cavendish and Dakota on Zack's diaminohexane spill instead of chemical absorbent.  Milo and his friends destroyed most of it with fire extinguishers, but the part that grabbed Dakota's leg escaped through the school's vents. It crawled toward the pistachio seedling that Cavendish stepped on and healed it. Then the tiny plant started to glow red.

In "The Llama Incident", a Pistachion was carried away by llamas.

In "Missing Milo", Cavendish and Dakota prevented Milo from stepping on King Pistachion's seedling, resulting in him taking over the world by 2175. It was ultimately Diogee that erased the Pistachions from future history.

In "Fungus Among Us", it is revealed that back in 1955, the Pistachion that Dakota knocked off his time vehicle had spent seven years creating his own plan for overthrowing the human race. In 1965, he put his plan into action — to capture humans and replace them with disguised Pistachions — and was still carrying it out in Milo's time.

In "The Phineas and Ferb Effect", Derek leads his Pistachion army in overtaking the human race, having created a machine that could convert humans into Pistachions. His plans were foiled when Professor Time and Orton Mahlson went back in time to destroy him, finally erasing Pistachions from the timeline.

Retrieved from "https://milomurphyslaw.fandom.com/wiki/Pistachion?oldid=79118"
Community content is available under CC-BY-SA unless otherwise noted.