Milo goes to his first football game in years.

"The Undergrounders" (Original Airing)
"Sunny Side Up" (Re-runs)

"Rooting for the Enemy" is the third episode in the first season of Milo Murphy's Law. It first aired on October 10, 2016.[1]

When Coach Mitchell feels pessimistic about the school's next football match, Milo is allowed to attend the game for the first time in years, noting that the school will lose even without Murphy's Law. When Milo does go, he and Melissa discover Murphy's Law has an interesting effect when Milo cheers for the opposing team.

At the Jefferson County Middle School pep rally proceeding Zack Underwood's first football game as part of the Jefferson County Middle School Geckos, Coach Nolan Mitchell expresses his belief that they are doomed to lose the game, because the opposing team consists of players who have been held back six years straight. After causing a bleacher to collapse, Milo and Melissa are leaving when Zack pleads with them to come to the game. Milo expresses interest, but has spent a number of years not attending games due to Murphy's Law, instead spending the time with Melissa trying to find less dangerous activities. However, Mort then informs Milo that Coach Mitchell has given permission for Milo to attend this game, as he's already convinced that the team is going to fail horribly.

An enthusiastic Milo attends the game with Melissa, much to the consternation of the other students, among them Bradley, who are among the few spectators on the Geckos' side with the Middletown Tigers and their fans out in force. The game initially goes quite poorly for the Geckos, something Bradley attempts to pin on Milo's presence. Milo jokingly cheers for the Tigers instead and the Geckos score their first points of the game. Inspired, Milo quickly purchases all the Tigers' merchandise available and, after donning it, strides onto the field, launching into the song "Rooting for the Enemy". This action allows the Geckos to quickly catch up with their rivals and eventually win the game, though a sinkhole caused by a rogue tunneling machine causes Milo and several spectators who carry him following the victory to fall into a hole. With a broken thumb as an injury, Milo is visited at the hospital by the team and given the game ball.

For a full transcript of "Rooting for the Enemy", click here.

A football player points Diogee off the field. 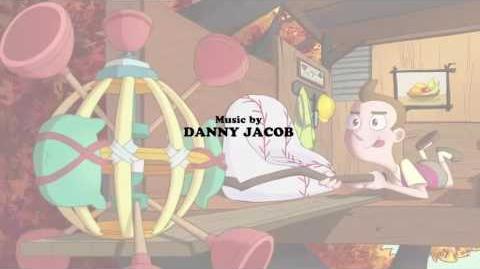 Retrieved from "https://milomurphyslaw.fandom.com/wiki/Rooting_for_the_Enemy?oldid=78281"
Community content is available under CC-BY-SA unless otherwise noted.