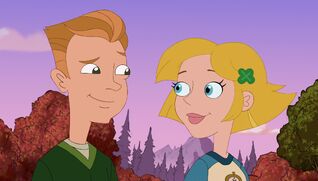 Sara Murphy and Neal are a teenage couple who bond over shared popular culture mediums. They playfully refer to each other as "from the comic shop".

Before dating, Sara would pine over him for months and talk about him around the house. When meeting Neal for lunch, Sara was unsure if his feelings for her were platonic or romantic. She spent much of their time together frantically debating over it. After going on a joyride with her brother and his friends she learns he feels the same way about her and they watch the sunset. Their relationship continues and and is still going strong.

Like Sara, Neal would talk about her with his sister. He likes how she has strong opinions of things. During their day together he questioned if they were on a date or not. After their toboggan ride he asks her this and they start a relationship ship.

Retrieved from "https://milomurphyslaw.fandom.com/wiki/Sara_and_Neal%27s_Relationship?oldid=57095"
Community content is available under CC-BY-SA unless otherwise noted.