Science Teacher in Space is the song heard during the Season 1 episode, "The Substitute", when the substitute teacher - Ms. Baxter - accidentally activates one function on the Quantum Localizer, trying to turn it off after mistaking it for Melissa's cell phone, and gets sucked in by some kind of space-time vortex into space.

In this format it's difficult to get the D, Ds4, D, Ds2, D to line up with the lyrics correctly. If you're not familiar with this pattern of 'D' variations I suggest that you play around with it a bit before trying to fit into this song.
Just playing D works with the song if you have trouble with it.
Also, there's a "mini riff" stuffed in the Bb. The notes are, A, Bb, pause, A, Bb, pause, A, Bb, C, D, ending so the D is played with the chord when you change to D. (The second time it ends with a G instead of D on the G chord change.)
The second time "How will you ever know" is sung, the G - C are played arpeggio on the three high strings. 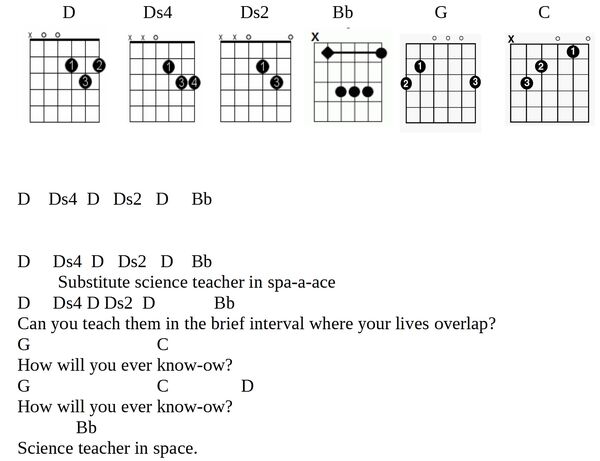 Retrieved from "https://milomurphyslaw.fandom.com/wiki/Science_Teacher_in_Space?oldid=107468"
Community content is available under CC-BY-SA unless otherwise noted.