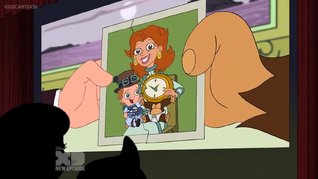 The Doctor Zone Files: The Movie Files is the only known feature film in the Doctor Zone franchise. Coinciding with its release was a dog version of the film titled The Dog Door Bone Files.

While the majority of the plot is unknown, the ending has been seen: Tying into an arc that was shown on "The Doctor Zone Files" (specifically "The Heart of the Moon 3,679: The Inner Sanctum of the Trashcandroids"), it is revealed that Doctor Zone (Orton Mahlson) and Time Ape are brothers separated at birth while escaping a dying planet. Doctor Zone escaped, but Time Ape was sucked into a time vortex that turned him into a transchronological being whose appearance would make our heads explode. Doctor Zone would later be sucked into that vortex, and after Time Ape changed back into his original form, the Doctor took Time Ape with him. ("The Doctor Zone Files")

Dr. Zone: Well, Time Ape, once again we've had the time of our lives. After all, time is relative. (He and Time Ape produce the two halves of the ripped photograph. They then place them together, revealing a baby Dr. Zone and baby Time Ape on the lap of their mom.) Hmm.

Add a photo to this gallery
Retrieved from "https://milomurphyslaw.fandom.com/wiki/The_Doctor_Zone_Files:_The_Movie_Files?oldid=60806"
Community content is available under CC-BY-SA unless otherwise noted.