The Little Engine That Couldn't is the 21st episode in the first season of Milo Murphy's Law. [1]

When Melissa's dad drives her and Milo into town on a decommissioned fire engine, chaos ensues. [2][2]

Milo and Melissa visit Mr. Chase at the fire department as he is cleaning up an old fire engine that's to be delivered to a museum. As usual Mr. Chase is apprehensive about Milo's presence, but is impressed when he learns about Milo's considerable knowledge, and agrees to let the pair ride with him. Meanwhile, Balthazar Cavendish and Vinnie Dakota have received another pistachio-guarding assignment, only to find that their newly assigned vehicle is a tandem bicycle, which Cavendish sees as yet another instance of their superiors demeaning them. The fire engine goes out of control as Mr. Chase is driving it to the museum, and smashes Cavendish and Dakota's new bike; spotting Milo, the pair chase after him with Cavendish determined to find out the truth about Milo.

Milo puts his best efforts into keeping the engine from crashing or causing any severe destruction, though they do end up dragging an old trolley car that's been converted into a diner. Cavendish and Dakota board it and confront Milo, but since he is not a time-traveling agent he has no idea what they're talking about; he then acts to rescue several cats, one of whom bears more than a passing resemblance to Cavendish. The pair end up being thrown off the engine after the trolley car becomes detached, and the engine finally comes to a stop in front of the firefighting museum tangled with a Tyrannosaurus Rex display from the Natural History Museum that arouses popular interest. Mr. Chase then admits that he and Milo have more in common than he had first thought, as Milo's efforts to contend with Murphy's Law are not unlike his own career as a firefighter.

For a full transcript of "The Little Engine That Couldn't", click here. 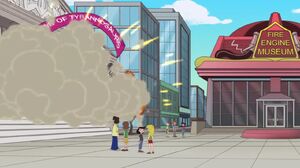 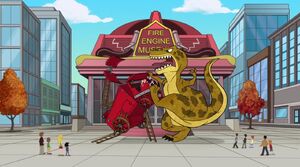 Retrieved from "https://milomurphyslaw.fandom.com/wiki/The_Little_Engine_That_Couldn%27t?oldid=17178"
Community content is available under CC-BY-SA unless otherwise noted.