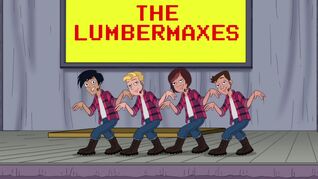 The Lumbermaxes, also referred to as The Lumbermax, are the remaining Lumberzacks after Zack's departure, led by Max. They were Zack's former friends prior to his moving away. The band's other members, Sean, Lyle and Melvin, notably all changed their name to Max once Max assumed leadership.

Other than that, the band barely saw any other changes: it's still a lumberjack-themed boyband, and their only known song, "Saw Away at my Heart", is almost identical to the Lumberzacks hit single Chop Away at my Heart, with only minimal lyrical differences.

They competed in The Battle of the Bands. We learn that their names are Max, Sean, Lyle, and Melvin, but the latter three all had their names changed to Max after they formed the new band. They are enjoying success and corporate sponsorship deals. A girl "came between" him and his former bandmates and that afterward, Zack decided to leave the band, though contrary to his report to his friends his former bandmates seemed uninterested. The Lumbermaxes ended up competing in the Battle of the Bands with Zack's new band Just Getting Started, at which point Zack learned that their only song was the same song he had performed with them with the only modification being replacing the word "Chop" with the word "Saw" in the lyrics. After the parking lot where they all performed flooded, The Lumbermaxes attempted to persuade Zack to rejoin them but were rejected, with Slash making the final comment that Zack should just leave. ("Battle of the Bands")

The Lumbermaxes were replaced with Pistachions who drive a windowless van. ("Fungus Among Us")

In "The Phineas and Ferb Effect" they were seen in the Phistachion cage, while Zack, Baljeet, Buford, and Sara were performing Chop Away at my Heart.