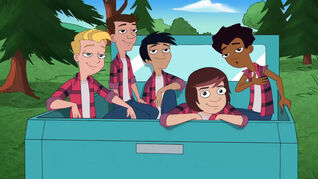 The Lumberzacks were a Lumberjack-themed boy band that previously included Zack Underwood, the group's namesake, until he left the group. Apart from Zack, the other members included Max, Sean, Lyle, and Melvin.

Since then, Max became the new lead singer, subsequently changing the name of the group to The Lumbermaxes, as well as the other members' names to Max.

When Wilson the astronaut flashbacked to being locked out of his station, his partner, Larry, could be seen listening on headphones to Chop Away at my Heart. ("The Note")

The Lumberzacks were best known for their song Chop Away at My Heart, which had been inspired by their coincidental possession of identical outfits that included flannel shirts and jeans. While the group did enjoy some success and fans - including Veronica - Zack eventually became embarrassed by the fact of his membership in the group after he'd left it. Despite his best efforts, the truth was eventually learned by Milo and Melissa. ("Secrets and Pies")

Zack is reunited with his former bandmates and learns that Max has taken over following his departure and that they are enjoying success and corporate sponsorship deals. He explains to his friends that a girl "came between" him and his former bandmates and that afterward, Zack decided to leave the band, though contrary to his report to his friends his former bandmates seemed uninterested. The Lumbermaxes ended up competing in the Battle of the Bands with Zack's new band Just Getting Started, at which point Zack learned that their only song was the same song he had performed with them with the only modification being replacing the word "Chop" with the word "Saw" in the lyrics. After the parking lot where they all performed flooded, The Lumbermaxes attempted to persuade Zack to rejoin them but were rejected, with Slash making the final comment that Zack should just leave. ("Battle of the Bands")