Milo, Melissa, and Zack try to save the old clock at City Hall that Melissa's great-grandmother designed.

"The Ticking Clock" is the twelfth episode of the second season of Milo Murphy's Law.

Melissa gets help from Milo, Zack, Clyde Rickenbacker and C.I.D.D. to try fixing Ol' Bessie, the clock at City Hall made by Melissa's great-grandmother, before Victor Verliezer is legally allowed to take it down. Meanwhile, Perry is assigned to watch over Doofenshmirtz, who tries to get more into the role of the good guy by picking up sidewalk gum.

As Zack and Milo walk past parking meters expiring when they pass them, Melissa arrives and says that Ol' Bessie, the clock Abigail Chase, her great-grandmother, built was just bought and will be torn down, noting that it stopped working and must be fixed that day to avert its' destruction. She enlists the help of Clyde Rickenbacker and C.I.D.D. to help them, with Milo and Zack offering their assistance as well. They learn that the clock was bought by Victor Verliezer and he plans to knock down the old clock to replace it with a high tech extremely accurate clock that the city will have to pay him to upgrade yearly (or else it will turn into a dangerous robot that will destroy the city).

Meanwhile, Doofenshmirtz sets out on his newest inator to rid the city of sidewalk gum and Agent P is assigned to make sure his good act does not harm anyone unintentionally.

Back at Ol' Bessie, the five are trying to fix the clock before 5:00, but Veriliezer is sabotaging their efforts. Just then, Melissa has an idea. She tells the others to glue gum to the gears and has C.I.D.D. take her to Doof. She returns with the former evil scientist and uses his inator to turn the gears, fixing the clock. Veriliezer says he will have his revenge, but Murphy's Law causes him to be carried away by a giant ball of gum to a substitute teacher's conference.

For a full transcript of "The Ticking Clock", click here. 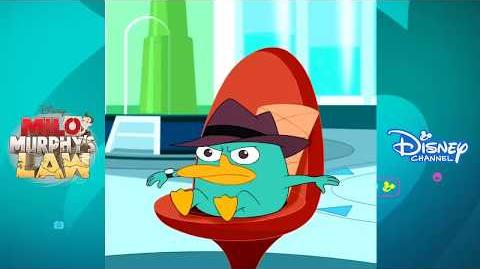