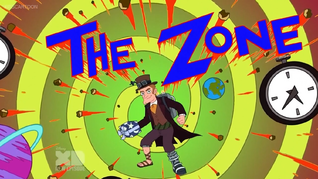 The Zone was the first television iteration (and first iteration in general) of the Dr. Zone Franchise. The show, created by Orton Mahlson, who would also star in the eponymous role, started in 1965 and lasted an indefinite time until it was succeeded by the second iteration, Dr. Zone.

A sci-fi show that would kickstart a fifty-year ongoing franchise, The Zone followed the adventures of Dr. Hankry Zone and his good friend Time Ape as they travel through space and time in their Time Beehicle. During their travels, they overcame many monsters, such as the dreaded Trashcandroids.

Orton Mahlson, son of a zoning commissioner, was making his own TV show at Balsawood Studios. Taking the age-old advice, "Write what you know", he pitched a show about a zoning commissioner. His producer demanded that he make the show weird, stating that because it was the 60's, it had to be weird.

Orton went outside for a think and encountered two time-travelling former pistachio protectors Balthazar Cavendish and Vinnie Dakota, and a 13-year-old boy named Milo Murphy. The time-travelers' behaviour and clothing style, along with Milo's description of his show, (of which he is a fan) inspired Orton to create "Dr. Zone", and in turn, the entire franchise.

In the middle of filming, Pistachions (pistachio monsters from the future) took over the studio, and later, the world. This caused Orton to travel to the future with his new friends to stop the Pistachions. ("Fungus Among Us")

After meeting Doofenshmirtz, Orton went back in time with him, Cavendish, Dakota, and Perry the Platypus, but reached the area after the Pistachions had already taken over. They attempted to go back another month, but Doofenshmirtz spilled soda on the time machine, breaking it, which caused the group to end up on The Island of Lost Dakotas.

Using the orange soda, the Dakotas helped them in the fight against the Pistachions. Although Milo's friends and family were initially turned into Pistachions, Professor Time showed up from the future and took Orton back to 1955 to kill Derek, which reverted everyone back to normal. ("The Phineas and Ferb Effect")

The Zone led to the creation of a beloved franchise, with four more iterations, a movie, and a passionate fan-base to follow. The Zone was clearly a cultural phenomenon.