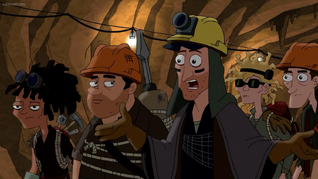 The Undergrounders are a group of railway track workers who, after getting lost, formed a new society known as Subterranus. Eventually, with the help of Diogee, Milo, Zack, and Melissa, they were lead back up to the surface, where most of the group dispersed in favor of returning to their old lives.

Current members of the group include a pipe-fitter named Scott and a milk carton named Mildred. Notable former members include Dave, who was the leader, and a member who was simply credited as Foreman.

In "The Undergrounders", Diogee helped them find a way out of the tunnels after a Murphy's Law related incident causes Milo, Zack, and Melissa to find them living below the city. While the majority of the members chose to go back to their old lives, Scott stayed underground, saying "there is no place in your world for me."

In "Battle of the Bands", Scott enters the battle of the bands with a new group of Undergrounders.

In "Missing Milo", Scott helps Zack and Melissa escape Brick and Savannah through the underground. He then scolded Mildred for 'giving him that look'.