Wyatt Burp Orange Soda was a type of orange soda that was presumably popular in 1965 in Danville, but was discontinued in the 1970s as a result of it's destructive effect on the environment.

The soda seems to have a wrap-around label on the cans that's mostly blue, but has a graphic of a rising orange slice, with the word "ORANGE" written over it. It also has a white stripe and an orange stripe at the top. Nearing the bottom, it has a brighter orange stripe than the shade of orange in the graphic next to it.

It was presumably first sold in the 1960s. In 1965, Dr. Heinz Doofenshmirtz, having journeyed back in time on the maiden voyage of his time machine, along with Perry the Platypus, Balthazar Cavendish, Vinnie Dakota, and Orton Mahlson, partially made the journey for the reason of obtaining this soda, although Cavendish later revealed this to be part of the reason that he was angry with Doofenshmirtz.

In the 1970s, the soda was discontinued because it was known to cause serious harm to the environment (such as severe chemical "burns" to vegetation).

Decades later, on the Island of Lost Dakotas, the time travel-created clones of Dakota manufactured Wyatt Burp orange soda for themselves, and subsequently offered them to Doofenshmirtz, Dakota, Cavendish and Mahlson when they crashed on the island.

A can of Wyatt Burp orange soda.

A bottle of the soda. 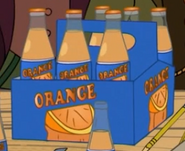 A 6-bottle case of Wyatt Burp.
Add a photo to this gallery
Retrieved from "https://milomurphyslaw.fandom.com/wiki/Wyatt_Burp_Orange_Soda?oldid=72727"
Community content is available under CC-BY-SA unless otherwise noted.