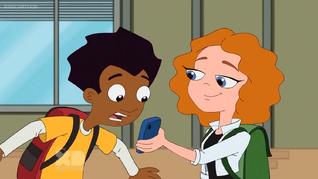 Zack Underwood and Melissa Chase are close friends, having met one another through Milo Murphy on Zack's first day at Jefferson County Middle School. As Milo's best friends, they share in the difficulties of dealing with Murphy's Law and often make bets with each other over whether events will play out the way they're supposed to.

More often then not they end up working together for Milo's sake, whether he gets separated due to Murphy's law, or he requests their help while he goes on ahead. The two of them work well together in these situations and do their best to make sure everything goes smoothly without Milo's guidance.

Zack considers Melissa a close friend and enjoys spending time with her alongside Milo. He often looks to her for level-headedness and logic when it comes to Murphy's law, although, being less open to chaos, he questions her casual attitude in the face of disaster.

Zack often shares friendly banter with Melissa, occasionally exchanging jokes and pestering her as they go about their day. When she keeps pointing out the fun of being on a quest, Zack pushes her playfully away and tells her to stop making up words. He pushes a toy badger into her back multiple times when he wants her to tell her secrets until she shows mild annoyance. Unperturbed by this, he asks her if it's working.

He tends to find Melissa's forgetfulness frustrating and often makes a monotonous comment when she forgets her belongings. At one point, he made an attempt to help her with the problem, only growing more annoyed when she carelessly decided that his method didn't work without actually considering it.

Upon meeting Zack and Melissa in a Pistachion prison, Buford asks them whether they're a couple. The two of them promptly deny it as they struggle for a response. Later, having watched the two of them run off to find Milo without explanation, Buford exclaims that he called it. Baljeet brings this up once more, briefly flirting with Melissa before apologizing to Zack, who responds that they're not a couple.

Initially, Zack is against Melissa's idea of being the ones to help Scott with his date, stating that they were the last people to give dating advice. In spite of this, he goes with her and helps with the preparations.

After finding out that Melissa's father put her into a program where woman mentor girls because he thought she needed more 'fem-ergy', Zack stated that he could see it, earning him a punch in the shoulder. He quickly corrects himself, sarcastically stating that she was a 'delicate flower'. Later, after watching her save the city, he compliments her on her 'fem-ergy'.

Before Jefferson G. County Middle School's student award ceremony, Amanda finds out that Melissa was nominated for 'most tolerant friend', and immediately expresses disbelief. This causes Melissa to step towards her threateningly, stating 'don't push it, lady', prompting Zack to quickly pull her back by her shoulders.

He plays a number of games in Milo's yard with Melissa while waiting for Milo to escape his room. He's shocked when she beats his high score on an online game and quickly asks her to teach him how.

While waiting for Milo together at the mall, Melissa shouts to Milo to hurry up, stating that hanging out with Zack alone was starting to feel like a date, before glancing back at Zack. He promptly scoffs and states 'you wish!'. They then sit at the table together, enjoying lunch while waiting for Milo to find a way out of the elevator he'd gotten trapped in. The two of them comment back and forth over his antics while there.

After Milo is later abducted a second time, Zack notices that Melissa looks worried, and moves to ask her what was wrong. When she voices her fear, he sits down beside her and holds her close to give what comfort he could.

When the ship crash lands on Octalia, Melissa promptly approaches Zack to find out if he's holding up alright. Realizing that he feels fine in spite of everything going on, Zack describes his feelings and tells her, confidently, that he's done being afraid. Hearing this, Melissa puts a hand on his shoulder and smiles, saying 'Oh, I like this Zack..' before leaving. He stares after her, wide-eyed and silent, and Perry nudges him, chattering and giving him a thumbs up when he looks down.

After devising a plan to get Milo to the Sphere of Calamity, the two of them pair up to do their part in the effort to save Octalia. They maneuver the chaos caused by Orgaluth's law side by side, working together to help save Octalia.

At the end of their adventure on Octalia, Melissa smiles and looks at Zack, saying 'no fear?'. He confirms by saying the same thing before wrapping his arm around her shoulder and leaning his face against hers, only to jump back in shock and horror when he realized what he'd done. In response, Melissa leans in and kisses him on the cheek before boarding the ship, leaving him staring after her with wide eyes.

Melissa considers Zack a close friend and enjoys spending time with him. As the other member of their trio without Murphy's law, Melissa often relates to Zack as a representation of normalcy in the face of constant disaster. Being the more reckless of the two, however, she often encourages him to move out of his comfort zone when he succumbs to his nerves.

She expressed amusement upon finding out he'd been part of a lumberjack-themed boy band. In spite of her teasing, Melissa admitted that it was cool that he'd been in a band.

Occasionally, Melissa catches Zack up on what it means to be Milo's friend, often telling him stories about the past and explaining different circumstances when they become relevant. When he's first finding out about the spontaneity of Murphy family vacations, Melissa shows him an old Murphy photo album, naming a number of the disasters that had occurred because of Murphy's law, much to his shock.

Having more experience around Murphy's law, she's quick to remind him of the potential for disasters whenever he underestimates their situation.

She often leaves Zack to his fate when it comes to spending time around Milo, keeping her distance as the two of them are chased away by a concrete drainage pipe and looking at Zack when Milo asks for a volunteer during science class. Otherwise, Melissa enjoys spending time with Zack outside of Milo's sphere of influence; when the Murphys went on vacation, Melissa and Zack happily spent their time in a pool, enjoying the peace while they watched Diogee.

Melissa found it offputting when Zack changed his personality in order to impress Jackie and reminisced to Milo about the days when Zack used to worry about danger.

Like Zack, Melissa promptly denies it and struggles for a response when Buford asks them if they're a couple. She gets Zack to act as a diversion while she pulls off a plan to escape the Pistachion prisons, and encourages him to continue his act even after he gets annoyed at Baljeet for taking over.

Melissa often punches Zack in the shoulder at the stuff he says, generally after he teases her or makes a joke. On one occasion, she punched him in the shoulder after he failed to take half of the blame for attacking Candace Flynn, and again after he made a pun about his old elementary school. When she was in too much of a rush to punch him for something he'd said on another occasion, Melissa simply said 'punch you later'.

While playing a board game together, Melissa draws a card stating she had to 'crow like a lard rooster', prompting Zack smirk and say 'start crowing'. After she does a perfect imitation of the sound, Melissa smirks at Zack's shock, and states 'yeah, you don't know everything about me'.

Melissa was deeply amused by the thought of Zack working on a farm to the point she laughed about it to Milo and recorded the entire day on her phone. When he'd invited them to help, she made a joke about the amount of squealing Zack would do, and she continuously pointed out the mistakes he made as a city boy. In spite of this, she enjoyed the day and had fun watching Zack do his farm chores.

They passed the time waiting for Milo to escape his room by playing a variety of games in his front yard. While there, Melissa beats Zack's high score on an online game and then goes on to play a number of other games with him.

While waiting for Milo at the mall together, the two of them sit together at the food court having lunch. After he loses the use of his phone, Melissa shouts down asking for Milo to hurry up, because spending time with Zack alone was starting to feel like a date. After saying this, she looks back at Zack, who scoffs and states 'you wish'.

Having entered space after fixing up the Octalian ship to go after Milo, Zack notices that Melissa is worried and asks her what's wrong. When she voices her fears, he holds her close to offer comfort. After they accidentally crash land the ship on Octalia, Melissa is quick to approach Zack and ask him how he was feeling. He says he's okay, and she admits to being a little freaked out. When he responds confidentially that he felt fine, and that he was done being afraid, she put a hand on his shoulder and smiles, stating 'Oh, I like this Zack...' before leaving.

After devising a plan to get Milo to the Sphere of Calamity, the two of them pair up to do their part in the effort to save Octalia. They maneuver the chaos caused by Orgaluth's law side by side, working together to help as much as they can.

At the end of their adventure on Octalia, she smiles at Zack and says 'no fear?'. But when he responds by wrapping an arm around her shoulder and leaning in close, Melissa frowns and stares at his arm with wide eyes. Upon noticing, Zack panics and jumps away, but she responds by leaning in and giving him a long kiss on the cheek before boarding the ship.

Romantic hints to Zack and Melissa

Melissa and Zack are often seen together, as they are friends with Milo. It appears that the two have gradually gained romantic feelings for each other over the course of the series, though it is not as clear as with Milo and Amanda. Here are a few hints at this pairing (Note: Shipping hints can be very subjective. One person's hints are another's average, friendly moment):

Start a Discussion Discussions about Zack and Melissa's Relationship